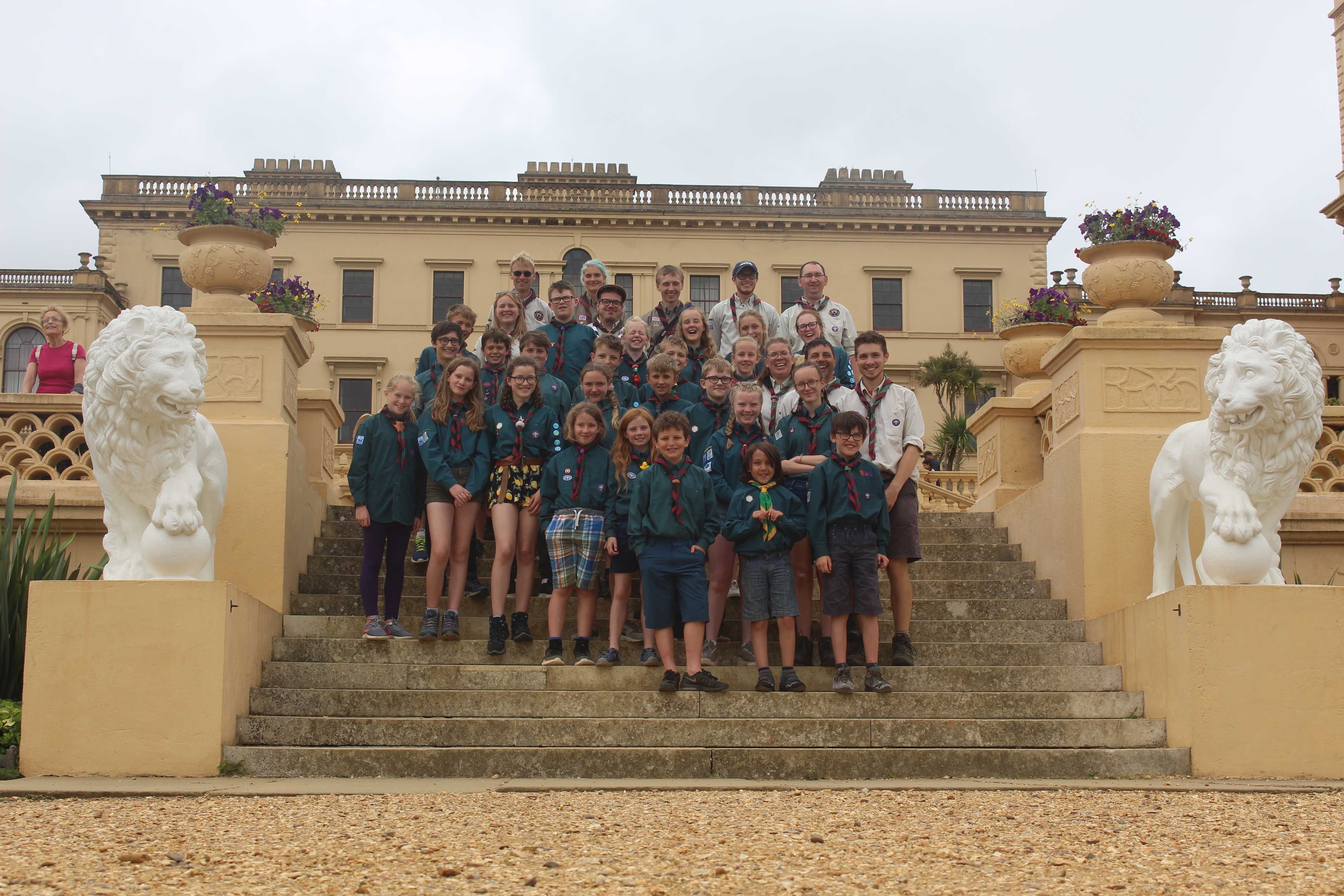 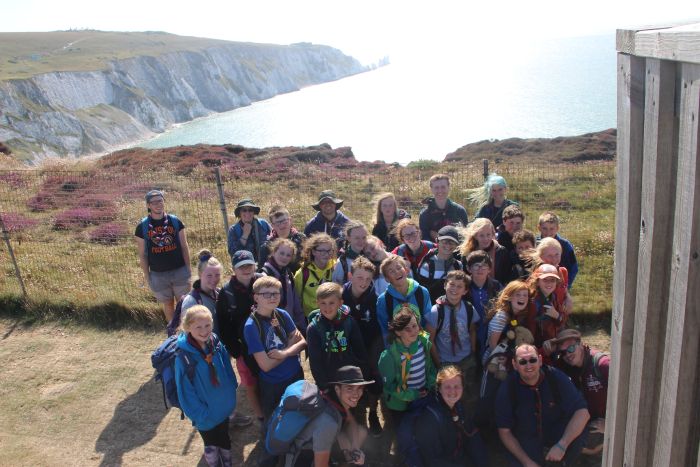 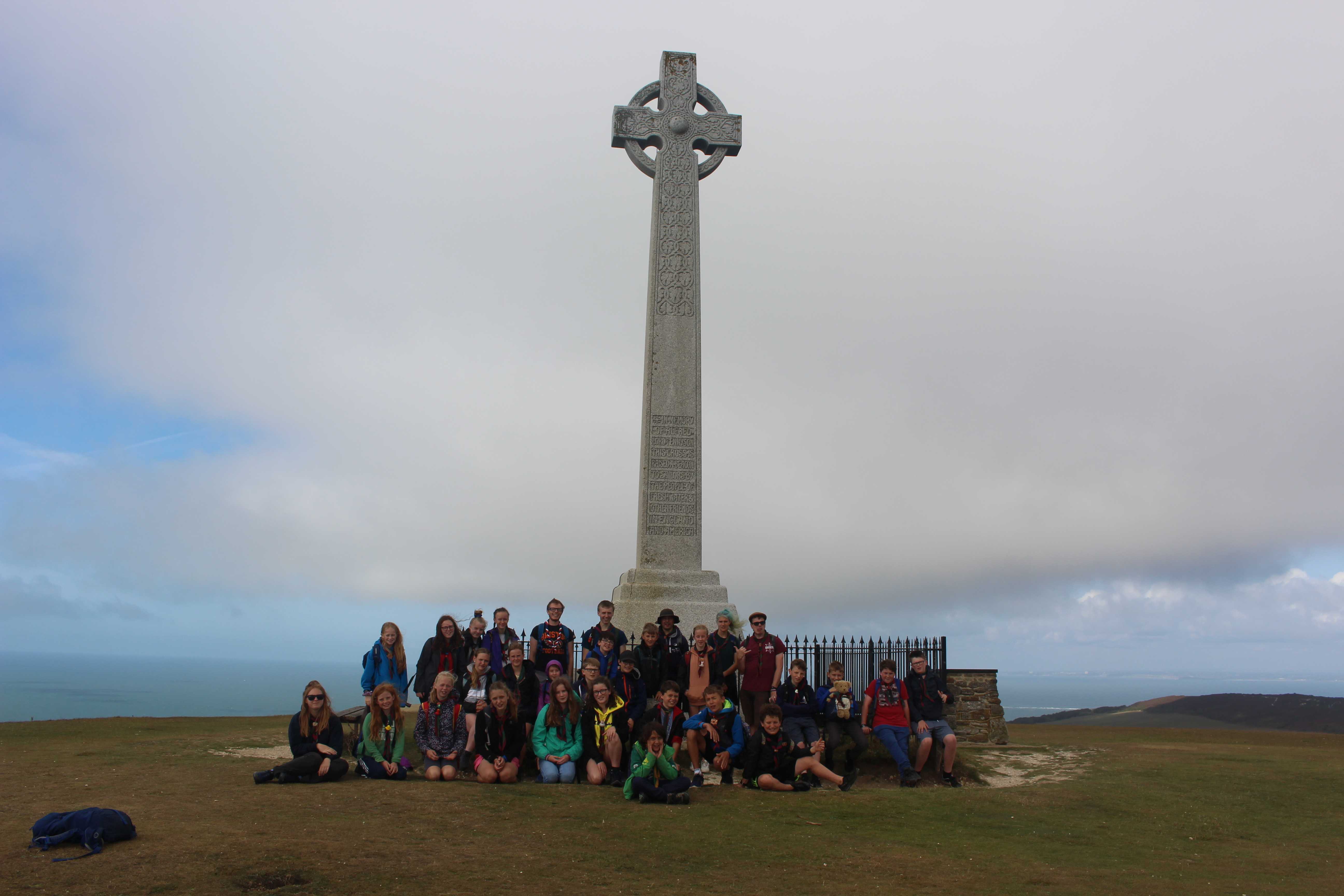 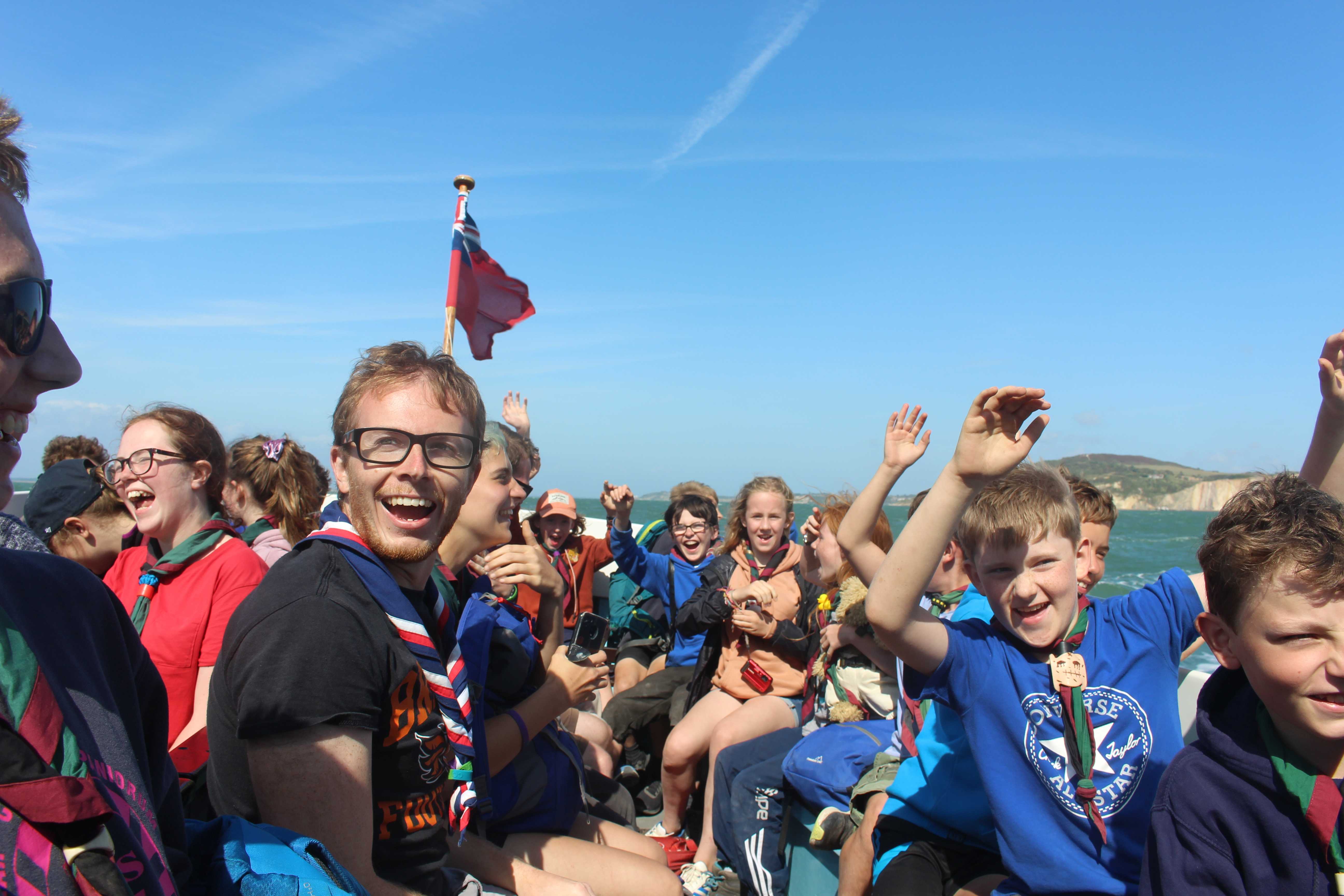 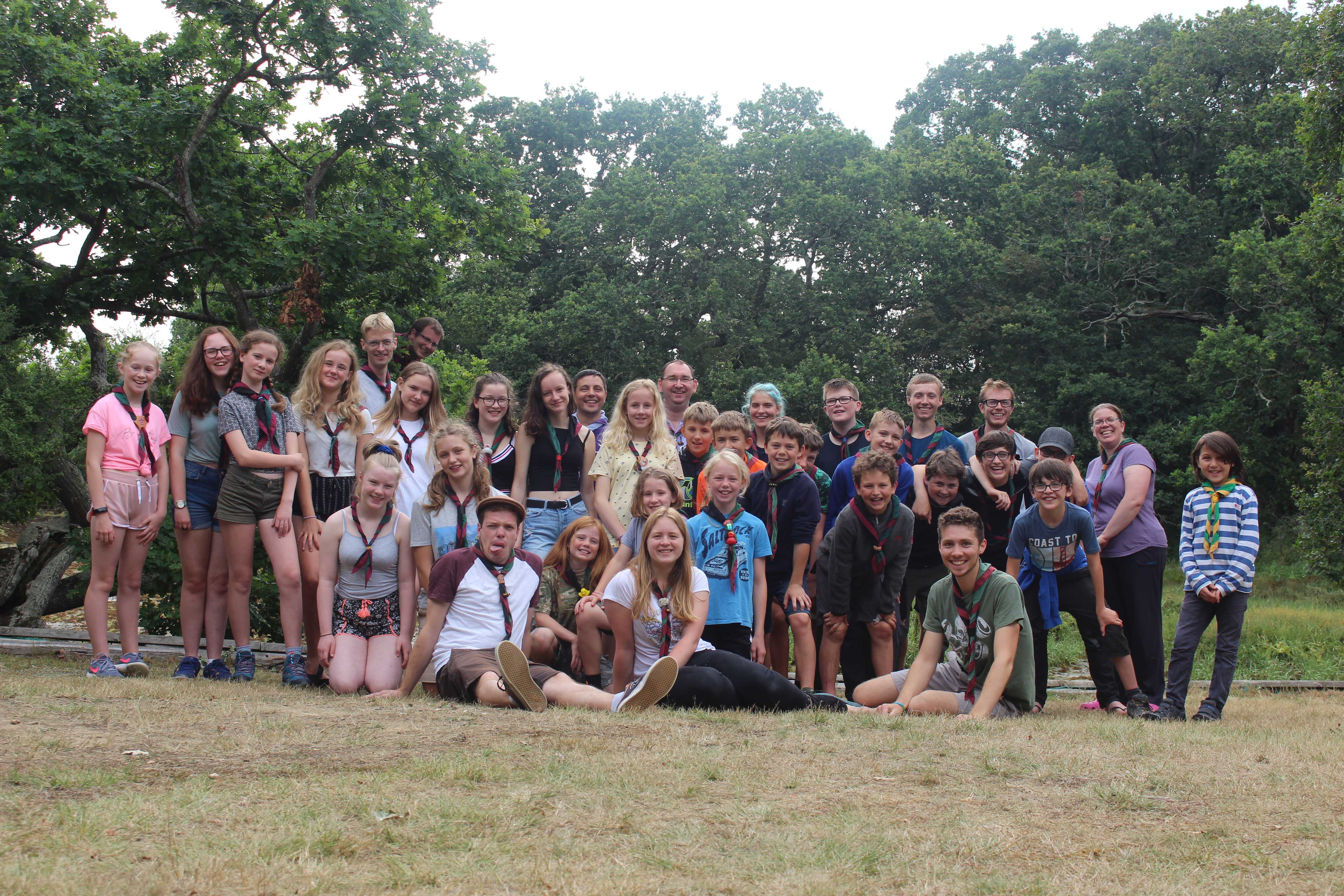 A thoroughly entertaining view from one of the Scouts:

Day 1: Pitching up
As usual the 62nd had set out on their yearly tradition of a summer camp. Transportation was to be done in the usual style of minibuses but with the ambitious location the leaders had chosen the scouts had to cross a perilous sea (a small ferry ride across a five mile stretch of the Solent).
Once we had sailed the wild oceans and made it to dry land we continued in our minibuses. Finally, after chopping and slashing through the undergrowth of the Isle of Wight we eventually got to our destination, “CORF Scout Camp” with its high branching trees, mudflats and lukewarm waters, or the Serengeti as we called it.
We then pitched up – this part is not as interesting as all it is, is a bunch of scouts pitching tents. No toilet to dig which disappointed me as I loved doing it last year.

Day 2: Archery and Rifle shooting
To begin with it was an early morning sun rise accompanied by the sound of leaders in the distance shouting “wake up, wake up”. So we got up, dressed, had breakfast, the leaders split us into 3 teams and we went on our merry way. One group went to archery, one group went rifle shooting and the other group was held back at camp. I have nothing much to say about this day other than it was fun, but that scouts have definitely got the better eye sight.

Day 3: Walk to the Old Battery /The Needles
Again the morning, get dressed and listen to the old men singing their wake up call. The walk was one of my favourite days of the week – it was action packed, fun and gave everybody a bit of good old exercise. After what felt like an eternity, we reached the end of our walk and entered The Old Battery (not the one you use to power your favourite toy car with.) It was an old army base full of World War 2 guns and lights, also an expensive souvenir shop. It was very interesting to have a look round and even see how it would work. The next thing was The Needles. We were going to take the steps down to the beach but we had to use the chair lift because the steps were having work done on them. The chair lift was lots of fun and felt like you might fall out of it at any moment. Then we took our boat tour in the really rough waves out to The Needles. No one was sick, well it seemed so anyway.

Day 4: Kayaking and raft building
This day was set out similar to day 2, with 3 groups doing 2 activities. I personally preferred the raft building. The reason why this is, is mainly just because everyone’s raft fell apart, oh and I think they definitely had a great time. I also enjoyed the kayaking as we were able to explore more of the lovely waters of the Serengeti.

Day 5: Coasteering and mountain boarding
The day started like every other day. We got up, dressed, did all the things you do and then set out on another day of exciting activities. The first activity was mountain boarding which is basically using a skate board just with bigger wheels down a grassy hillside. It was probably one of the hardest exercises as not many of us knew exactly how to do it and there were a few bumps and bruises. We then headed back to have lunch and once we had devoured our chocolate spread sandwiches we were all given the opportunity to write down a song to put on a new mix tape to replace Nick’s preposterous choice of music. Coasteering was the next activity. We were all kitted up well but it was another activity that I think people struggled with as the waves were particularly harsh that day. Most of it was fun but the part at the end when people had to leave the cave, that’s where most scouts were having to scramble.

Day 6: Osborne House (Queen Victoria’s summer residence)
It is quite obvious what happened on this day as it is in the title but I thought it was a bit different to the normal stuff. I thought it was going to be a tour around someone’s house but in the end it basically was like a museum that was linked to the royal family, like literally. Finally once we got out we headed down to the beach to have an ice cream and a laugh.

Day 7: Taskmaster
For this day we split into our patrols and then chose a colour to represent our patrol in a form of an envelope. There were two set tasks to begin with and the other tasks were to be found round camp. We had fun running blind folded round fields, running away from Dan whilst tied up and much more. The final contest was to keep one member of our team to get the least gunged around a track.

Day 8: Titanic
I think this is a suitable name for the last day. First we had to break camp by packing up everything and making for port. When we set off on the ferry, a very strong wind was gusting. In the end everyone got up and did the iconic pose from Titanic at the front of the ship. It was a relief to make port and board the minibuses for the journey back to Bristol (except I didn’t, but that is another story …)
Other activities enjoyed on camp were yoga, camp fire songs and the king cub tournament where the leaders were defeated and put in their rightful place.

A view from one of the Scouts:

The week was far from boring. We were constantly on the move and on our way to the next activity. With a challenge at every corner the week was going to be great.
We did rifle shooting and archery. We went on a boat trip around The Needles and tried the leader’s very own version of task master. All of this was just the beginning.
My personal favourite activities were raft building and kayaking, even though my teams raft fell apart in the first five meters! I also enjoyed visiting Osborn House, Queen Victoria’s most loved holiday spot. The day was interesting and at times very cold when we went swimming on her private beach. I will never forget going coasteering, not only were we getting hammered by waves but we never stopped singing, not even when we were swimming! Mega SUP was brilliant because we spent half an hour of just throwing each other off the board.
Along with all that we had to cook for ourselves in teams, which was challenging at times but really easy at others. We played loads of evening activities and had lots of camp fires.
Overall, the week was a huge success and everyone really enjoyed themselves. So, thanks to the good weather and all of the leaders who made it possible. 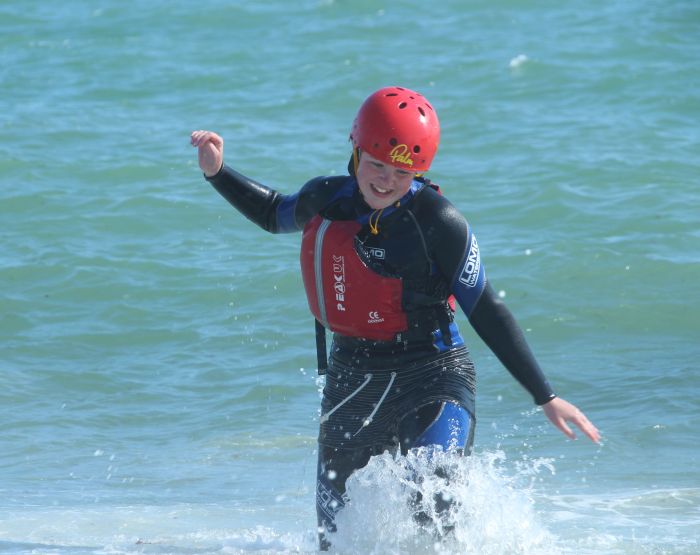 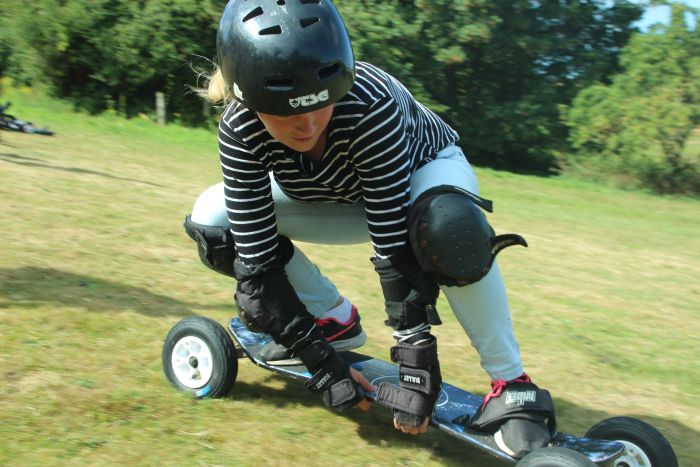 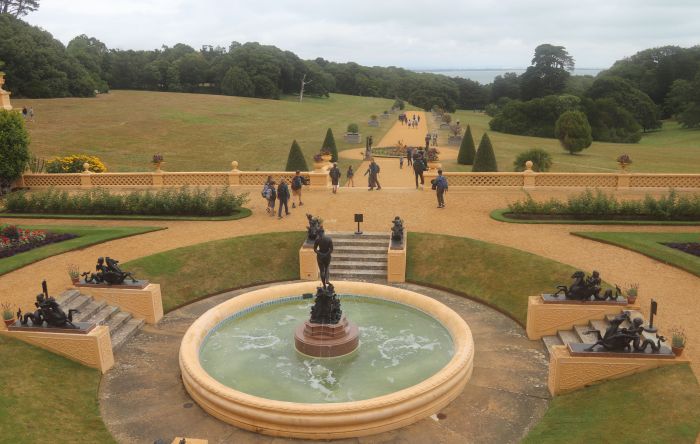 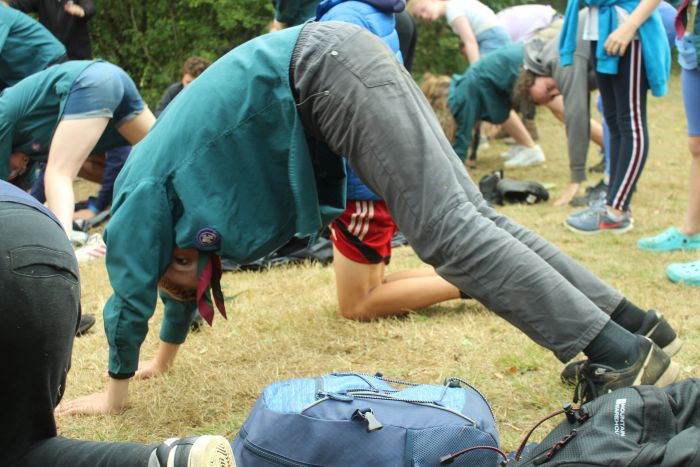 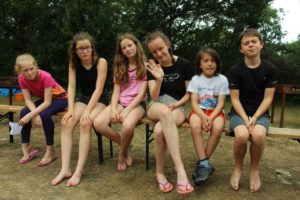 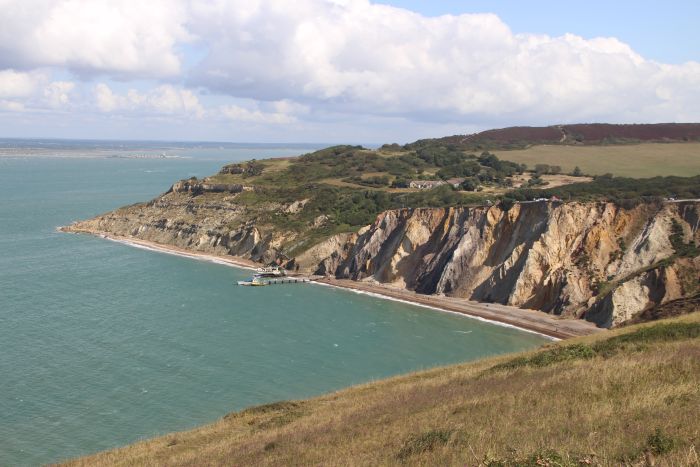 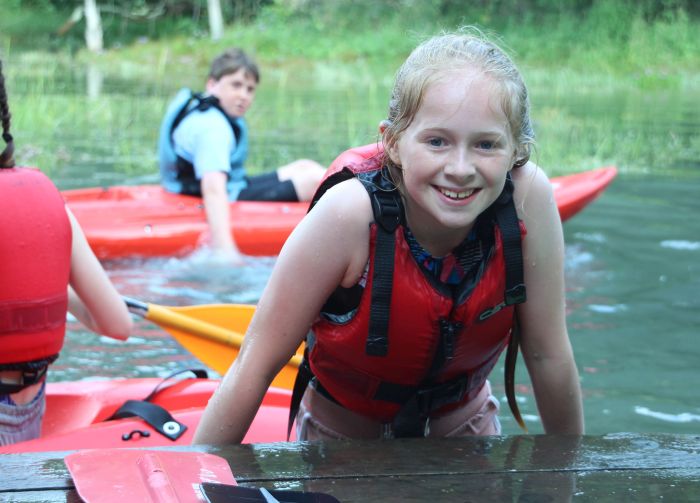 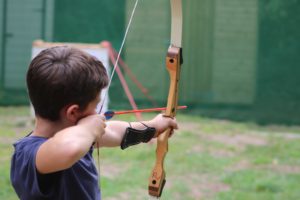 It must be abroad!? We’re on a ferry!

A whole week in the Isle of Wight blessed us with some lovely sunshine and an absolute hooley! We swam in the sea, from the campsite, archered, rifle shooted, silly gamesed, cooked, yoga-ed, all from the safety of our campsite.

Corf Campsite turned out to be a gorgeous little gem. Secluded wooded sites, stunningly placed next to an inlet on the north of the Island. However, whilst secluded plenty of opportunity to meet other Scouts.

Off site we coasteered, but nearly didn’t, around the south coast. Strong winds almost forced us out the water before we’d even started. Scouts swam bravely into flooded caves, all whilst singing the hokey-cokey. Due to the high winds standard SUPs were abandoned and everyone just piled on one and had a jolly good time!

Prior to this most Scouts wimped out with a brand new activity for us – mountain boarding! Most leaders saw it as a fast trip to hospital, so politely declined the opportunity. Several Scouts took their lead and also came up with every excuse under the sun. However, in better news plenty of Scouts grabbed the chance and were speeding gracefully down the hill on a skateboard with wheels….!?

Quote of the morning went to one Scout who announced determinindly: ‘I’m net letting a board with wheels beat me!’

…she was last seen flying off over the fields and beyond!

Osborne House also proved to be a surprise. Initial plans were a quick stop followed by a visit to another location. That location priced themselves way too high, so Osborne House it was. The house tour was exceptional. Lots of questions together with probing into Queen Victoria’s toilet, amongst other places. Memories!

Ice creams on the beach, a swim (without the use of Queen Voctoria’s changing booth sadly – just a towel!) on the beach. In the very spot where, according to one Scout: ‘Queen Victoria has clearly taken a wee in the sea’.

No visit to the IOW is complete without a trip to the Needles. a tasty hike from Tennyson Memorial along to the National Trust New Battery, windy beyond belief! Still, excellent views.

The next little bit was entirely unplanned! We’d arranged a boat trip out to the Needles, however for that we needed to be down on the beach.

The path was closed.

After initial panic, we all scrambled on the scariest chair lift in the Isle of Wight. Blowing a minor hooley, the cars remained stable enough for landing before silly games with pebbles on the beach.

As for the boat trip: whoa! Windy isn’t the word! Of course, we loved it and Mike, bless him, didn’t feel sick once! Remarkable considering it was way, way worse than the flat calm sea he was ill on!!

The King Kubb Tournament progressed during the week. The Scouts picked it up quickly, the defending champions, the leaders entered at the semi final stage and trounced the opposition. Things were looking good.

However, just like a usual England team the final did not g to plan. Despite trying to intimidate their opponents prior to first throw they were firmly beaten by the new 2019 Champions: The Yorkers.

Well done – I guess!! Deserved winners and their name now sits proudy on the King Kubb.

Following what can only be described as a very lovely week weather wise the last 24 hours was to prove not so.

The hooley was forecast and we all battened down as much as we could. The shelter tents were going no-where with the amount of pegs we hammered in!

Overnight was exciting, to say the least. Clive and Mike woke upto their tent in their faces (well actually Mike stayed asleep, Clive heroically sorted it out in the wind and rain! (and pyjamas!))

The next day required tents to be packed away and for this we wanted to avoid small Scouts being blonw away with a parachuting tent. Chance are they wouldn’t land in England, to be picked up on the way home and instead head to France. All hands on deck and we had mass tent putting down.

Nearly lost an event shelter, but rescued in time!

This year’s summer camp has risen to the top few for many leaders. Can’t wait to return!